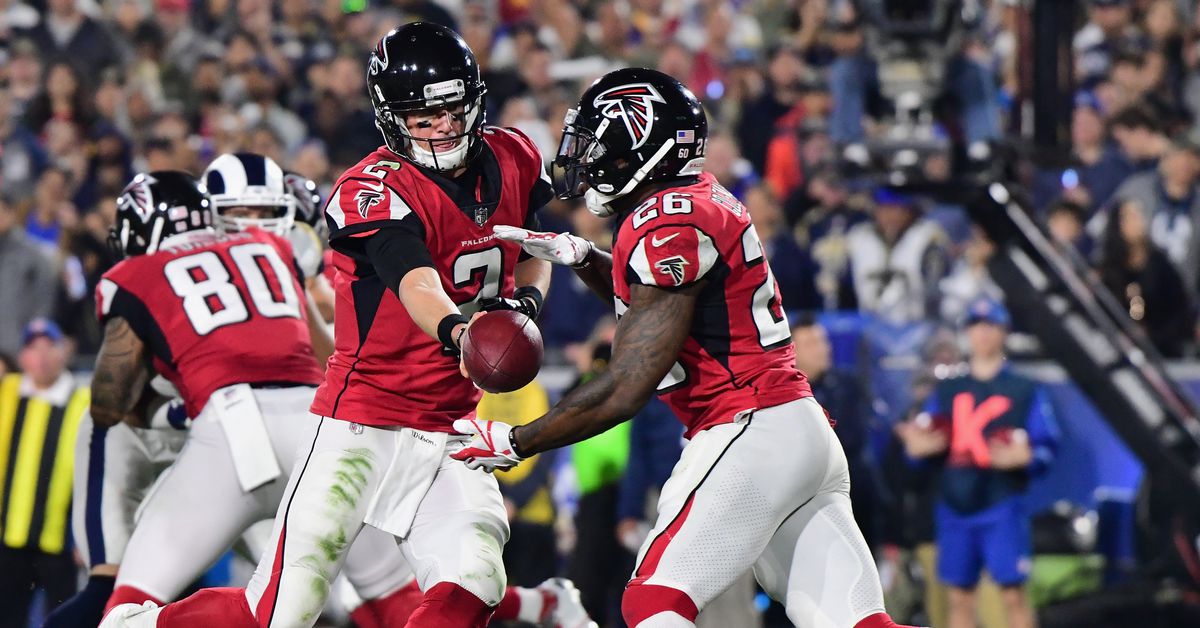 The Atlanta Falcons stepped up big on defense and shut down the Los Angeles Rams on the road in Saturday’s Wild Card round game. Atlanta only scored two touchdowns, but that was enough in a 26-13 win that sends them to the Divisional round, where they will face the Philadelphia Eagles.

Matt Ryan didn’t blow up the box score, but he had an efficient game with 218 yards and a touchdown on 21-of-30 passing. The big story was the Falcons defense, which gave L.A. little room to work with. Todd Gurley managed 101 yards on 14 carries, but he was a non-factor in the passing game, which is a crucial component of the Rams’ offense.

Without Gurley’s run-after-catch skills to rely on, Jared Goff struggled. He finished his first playoff game with 24-of-45 passing for 259 yards and a touchdown, but the Rams couldn’t move the ball for long stretches. Sean McVay’s first year as Rams coach ends on a down note with a first-round playoff loss.

Here’s everything that happened.

Atlanta punted away the ball, but not before the Rams had to burn two timeouts. Their final drive ended in a whimper, and Ryan kneeled out the victory.

L.A. went into hurry-up mode and quickly drove back into the red zone. Goff hit Tyler Higbee in the end zone, but replay revealed that he didn’t secure the ball. A fourth-down conversion failed, all but securing the win for the Falcons.

Falcons 26, Rams 13 The Rams’ defense badly needed a stop to get the ball back as soon as possible. Mohamed Sanu dashed those hopes by taking a screen pass 52 yards to the 10. A floating touchdown pass to Julio Jones serves as the possible dagger.

Falcons 19, Rams 13 After being mothballed for three quarters, Gurley woke up with a vengeance on the fourth quarter’s first drive. Runs of 14 and 33 yards got the Rams inside the red zone. They couldn’t get any further, though, and are six points down after the field goal.

The Rams got only two possessions in the entire quarter, with their comeback hopes dwindling as we approach the end.

The Rams punted on their next possession, but Robert Woods got a highlight play by snatching the ball out of the air in impressive fashion.

The Falcons got the ball to start the second half. Freeman took over on this drive, breaking tackles and grinding out chunk yards after contact. In related news, Rams defensive lineman Michael Brockers was ruled out with a knee injury.

Falcons 13, Rams 10 With no timeouts, L.A. seemingly ran out of time to try a touchdown, but after a long review, a Gurley catch was overturned into an incomplete pass, giving the Rams extra time. They ran one more play before kicking a 35-yard field goal, sending the Falcons to halftime with a three-point lead.

The Rams had a nice two-minute drill at the end of the half, with Goff hitting Robert Woods for a huge gain.

The turf monster strikes again, causing Matt Ryan to nearly do the splits.

Falcons 13, Rams 7 Goff tossed a beauty of a fade pass to Cooper Kupp, getting the Rams on the board as the offense finally got off the bus.

Gurley got going late in the first half, snapping off this 26-yard run that got the Rams in scoring position.

Los Angeles’ offense just can’t get out of first gear, with receivers dropping passes and Todd Gurley getting stuffed at the line. Of course, a bad turf isn’t helping matters.

Falcons 13, Rams 0 Following the turnover, the Falcons moved the ball inside the red zone Devonta Freeman finished the job with a 3-yard touchdown run (and an assist from Alex Mack), and the Rams are suddenly in danger at home.

The Rams committed another special teams gaffe, with Pharoh Cooper fumbling away a kickoff. Atlanta recovered at the 32-yard line and Matt Ryan was in business once again as the quarter ended.

Falcons 6, Rams 0 Julio Jones sparked the Falcons’ offense a bit with two big plays, pushing Atlanta past midfield. The drive stalled out, but they got in range for Matt Bryant to boot a 51-yard field goal.

Falcons 3, Rams 0 Atlanta takes advantage of the turnover with a 29-yard field goal, getting the first points of the game.

The Falcons couldn’t do anything on offense, but got a lucky break on special teams. A punted ball bounced off a Rams player, becoming a live ball that the Falcons recovered deep in Rams territory.

Takk McKinley dropped Jared Goff with a sack and busted out his sweet moves.

L.A. went three-and-out to start the game, but Johnny Hekker boomed a 66-yard punt to pin the Falcons at their own goal line. Naturally, Atlanta was also forced to punt after three plays.

The NFL playoffs are here, and the second matchup on Wild Card Weekend will see the sixth-seeded Atlanta Falcons taking on the third-seeded Los Angeles Rams. The two teams will be playing at 8:15 p.m. ET on NBC (live stream via NBC Sportsor FuboTV).

Los Angeles is the biggest surprise team in the playoffs. It went from being the worst team in the NFC West to one of the best teams in the NFC thanks to a strong defense and quarterback Jared Goff playing well.

As a rookie, it became a running joke how slowly Goff was coming along in practice, and many wrote him off after he struggled in his limited action. Last season, he played in seven games, completing 54.6 percent of his passes for 1,089 yards, five touchdowns and seven interceptions. But this season, Goff has completed 62.1 percent of his passes for 3,804 yards, 28 touchdowns and seven interceptions.

The Rams are ranked 10th in the league in total offense, a huge improvement from dead last, where they ranked in 2016. Defensively, they come in at 19th in the league from a pure yardage standpoint, but they rank 12th in points allowed. Los Angeles finished the regular season with an 11-5 record.

Atlanta finished at 10-6, and for a while looked like it might not make the playoffs. After starting the season with three consecutive wins, the Falcons then posted three consecutive losses. Their biggest improvement this season has been the defense. They rank eighth in the league in points allowed, whereas they ranked 27th in that category in 2016.

Saturday’s game will be played at the Los Angeles Memorial Coliseum, where crowds have increased steadily as the Rams have found success. It still isn’t considered one of the louder or most hostile places to play, but it’s a long way for Atlanta to travel.

When the year passes

This site uses Akismet to reduce spam. Learn how your comment data is processed.

Don’t just survive; Get a Life!!